When I was in college I studied in France for a few months.

I was enrolled in a hotel and restaurant management program and applied for a 3 month internship abroad. So, off I went, with 8 other students, to France. Most of the group were culinary students so we started in Paris and studied for a short time at Le Cordon Bleu, then we were off to Central Burgundy where we were each assigned to train at different hotels and restaurants in the area. During the week we were housed by our employers, but on weekends we would return to our home base, an old Bed and Breakfast in a tiny country village that had been turned into student housing. Many of our weekends were spent traveling to different restaurants, vineyards, farms, and assorted culinary points of interest; basically eating and drinking our way through the countryside.

During the week I trained as a backwaiter at a small Inn nestled in a picturesque river valley. The chef and owner was short, thick, and grey; and very much looked the part of French chef at a charming Burgundian Inn. He used to do this ridiculous King Kong impression, swinging from a support column in kitchen and beating his chest, trying to show off his knowledge of what I can only assume he thought was relevant to American college students.

The restaurant’s main dining room was surrounded by windows overlooking a stone patio, a 19th century river mill, and the lush walls of the valley beyond. At night the river and the overhanging trees were lit up to provide a stunning backdrop for diners. The kitchen specialized in upscale versions of homestyle regional classics like escargots, blood sausage with apples and butter, pates and terrines, and fresh trout.

The trout was so fresh in fact, that it was still swimming just before dinner service. At the back of the kitchen they’d diverted part of the river and built a screened in cage where they held live farm raised trout that were delivered once a week. One of my jobs before dinner service was to go out and scoop up 5 or 6 trout with a net and bring them into the kitchen.

I was completely surrounded by amazing food and, at the time, I was a vegetarian.

For those of you who don’t know much about the different regions of France, Burgundy is very rural farming country, and in 2003 the idea of someone choosing not to eat meat for reasons other than religion was completely unheard of. I knew going into the experience that if I didn’t want to starve (or upset my employer) that I would have to at least try to eat some fish. Lucky for me that the restaurant specialized in trout, so ate some fish I did. Now that I eat meat again, I still regret missing out on so many of the other amazing foods I politely turned down over those three months.

As a backwaiter, my main job was to bring finished dishes to the dining room and present them to our guests. My french was probably better than most of the group I was traveling with, but still left a lot to be desired. The restaurant was used to students with less than perfect French, so I was taught a series of pre-rehearsed lines to rattle off for each course during the dinner service. Despite my bad French, most Americans guests at the Inn had no idea that I was from the states. I’d recite my French lines and be on my way, never betraying the fact that I wasn’t a proper French waiter.

That was, until the couple from Rochester came to visit.

The Husband ordered our Truite au bleu, and neither of them knew what they were in for. Truite au bleu, or Blue trout, is a dish that’s prepared by taking a just-killed and cleaned whole trout and soaking it in vinegar before gently poaching in broth. After cooking the chef would prop the trout up on it’s belly so it looked like it was live and swimming, despite the fact that the skin had turned blue and started to peel off the flesh. It’s totally delicious, but I will admit that it’s appearance can be a bit off-putting for most Americans.

Before the plate even hit their table, I knew instantly that this couple was from Central New York. As I approcached them and the wife caught a glimpse of her husband’s dish, her hands went over her eyes and she started losing it. “Oh my gahd! Oh my gahd! That is just too much! Oh my gahd!”, all while peaking at the trout between fingers that were still covering her eyes. Growing up not far from Rochester, her accent was immediately recognizable to me, and I just started laughing and asked them (in English) where they were from.  I just had to speak up after that reaction, and we ended up having a really had a nice conversation throughout their dinner. Her husband, by the way, ended up loving the trout.

My favorite trout dish at the restaurant though, was the Truite aux amandes, or Trout Almondine. I don’t have the exact recipe from the Inn, but it’s actually a pretty common French dish so this recipe is very similar. Trout Almondine used to be considered a very fancy pants French entree in the 1980s, but it’s since gone out of fashion here in the US. I think its completely delicious and I vow to singlehandedly bring this traditional French dish back in to American kitchens.

Even though it’s considered “fancy”, this is actually rather quick and easy to prepare. It’s also totally delicious and decadent. Getting trout fillets instead of cleaned whole fish makes things even simpler, but slicing your own fillets is actually pretty simple if you have a nice sharp knife. The mild white fish is dredged in flour and seared in butter for a crispy skin and tender flaky flesh. Then slivered almonds get toasted in the same browning butter with a sprinkle of fresh herbs, and then everything is spooned over the plated trout.  Add a squeeze of fresh lemon and you’re done. Totally fancy. Totally French. Totally yummy.

Cut your trout into fillets if they aren’t already. In a dish large enough to fit the fillets, mix the flour, finely minced shallots, and thyme; and season generously with salt and pepper. Stir to combine. Press the trout fillets into flour mixture and pat onto both sides to coat completely.

Heat 2 tablespoons of butter in the largest sauté pan or skillet you have, over medium-high heat. When the butter stops bubbling, try to place all four of the fillets in the pan, skin side down. If you have to do them in stages (I did), it’s fine, but you don’t want to let the first round cool for too long. Sauté the fillets for about 3 minutes, watching carefully that they’re nicely browned but not burned. Turn the fillets over and cook them for about 3 minutes more. Transfer the fish to warm plates while making the sauce.

Add the remaining 3 tablespoons of butter and cook over high heat until it stops bubbling and turns a nutty brown. Add the sliced almonds and stir until just barely toasted. Remove the pan from the heat and allow to cool for a few seconds. Toss in the parsley and a little salt and pepper and stir to combine. Pour everything over the trout fillets and squeeze with a bit of fresh lemon juice. Serve immediately, with lemon wedges, mashed sweet potatoes, and sautéed green beans if desired 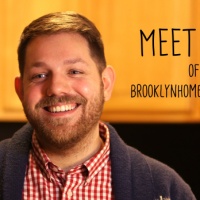