It’s no secret that I love buttermilk.

I love buttermilk so much, in fact, that when I read online about people substituting sour milk for buttermilk I actually get upset and maybe yell at the computer screen a little. When thekitchn recently ran an article about substitutions for buttermilk, I was beyond annoyed. I thought they were better than that. You know what I do when I don’t have buttermilk? I go to the damn store!!!

I know it’s hard to find buttermilk sold in small quantities, but I promise that it freezes really well, and then you’ll have it when you need it. In my opinion there’s just no excuse not to buy it when you’re shopping for a recipe. The main reason for my indignance is that buttermilk just turns everything it touches to gold, and so it seems ridiculous that anyone would work so hard to avoid using it. It’s mild acidity has the ability to loosen proteins in both meat and wheat gluten, making for fried chicken and biscuits that are equally tender and moist. It has a sour tanginess, but it’s not at all similar to milk soured with lemon juice. This tanginess is a cultured one, closer in flavor to yogurt or sour cream. Because it’s a cultured dairy product, it also has a light creamy thickness that you’ll never be able to achieve with sorry substitutes.

I’ve read that today’s commercial buttermilk doesn’t even come close to the real thing, the buttermilk our grandparents and great-grandparents used to use. I know it is possible to find buttermilk being made the old fashioned way, or even to make it yourself at home, but my fanaticism hasn’t gone that far… Yet. Ignorance is bliss I suppose because I’m perfectly happy using the stuff from the grocery store, and maintain that it has a flavor and viscosity unmatched by substitutes, resulting in baked goods and tasty treats with superior texture and taste you’ll never be able to achieve any other way.

I love buttermilk in everything but a drinking glass. That tanginess and viscosity is perfect for baking, but somehow doesn’t appeal to me for drinking. Not yet anyway. My great-grandmother used to drink the occasional glass when I was growing up. Her name was Opal, but we called her Nana, and at the time I thought she was out of her mind to drink the stuff. These days though, I think I almost get it. I love the smell now, and relish the occasional taste when it gets on my hands. When I first heard someone mention buttermilk ice cream, I knew I had to try it. I researched some recipes, did some reading, danced a little jig, dusted off the ice cream maker, and went to town.

I was so excited about tasting buttermilk ice cream that I accidentally mis-read the recipe. I skipped over the part about using half of a vanilla bean, and used the whole thing. It wasn’t until the bean was scraped and steeping in hot cream that I realized I’d messed up. You know what though, it was phenomenal! The recipe below is exactly as I made it, with plenty of vanilla.

This ice cream is serious business. I feel like people don’t give vanilla ice cream the credit it’s due, but I for one LOVE a good bowl of vanilla ice cream. This isn’t just any vanilla ice cream though. It’s BUTTERMILK FREAKIN VANILLA ICE CREAM. It’s every bit as creamy, custardy, sweet, and packed with all the vanilla flavor that you’d want it to be. Beyond all that though, it’s silky and rich, with a wonderful subtle tanginess that only comes from buttermilk. It’s almost lemony, but somehow not quite. It almost has a slight yogurt flavor, but again, that’s not quite it either. It’s buttermilk y’all, and it can’t be beat. 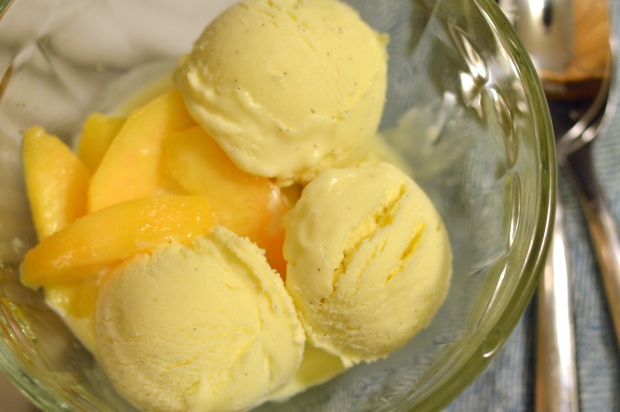 In a large, heavy saucepan, combine the heavy cream, vanilla bean (if using), and one cup of sugar and bring to a simmer over medium heat.
In a large bowl, whisk egg yolks and remaining 1/4 cup of sugar.
Remove the cream mixture from the heat and drizzle a small amount into the yolks, slowly, and whisking constantly to keep the eggs from curdling. Do this a few more times to warm up the yolks before pouring the yolk mixture back into the cream, whisking constantly.
Cook over low heat until the mixture is thick enough to coat the back of a spoon. Strain the mixture and whisk in the buttermilk, vanilla (if using), and salt. Cool completely and freeze according manufacturer’s directions. Serve with some fresh sliced peaches or strawberries.

* The original recipe called for 12 yolks. The ice cream would be outrageously rich and decadent if you wanted to use more, but with six yolks it’s still much much more rich than anything you can buy in a store.