There’s just something about pumpkin pie.

When I was a kid I was completely obsessed with pumpkin pie and had a really hard time understanding why we only ate it at Thanksgiving and not, say, every single day of the year.

My grandmother would always make her pies a day ahead and stash them in her sewing room, usually one of the coolest rooms in the house, to rest until after dinner on turkey day. She always covered them with an oversized square of waxed paper, and when no one was looking I’d sneak into the sewing room, close the door behind me, and lift the paper up and just stare at those pies.

I knew I couldn’t eat them until after dinner, but that didn’t stop me from just standing there taking in their earthy, homey aroma. I was tempted but I never touched them. I just wanted to look.

Of course, once dinner was over wild horses couldn’t have kept me from tearing into those rich, earthy, custardy pies.

When I was trying to decide what to serve for my fakesgiving dinner, the pumpkin pie was the menu item I had the most trouble with.

I think that my love for pumpkin pie was clouding my judgement. I wanted to do something sort of elevated and innovative, but I just couldn’t make up my mind. I took to pinterest to soak up some inspiration, and quickly realized that anyone who has ever posted a recipe on the internet has their own way of making pumpkin pie, and that any and every type of dessert ever invented and has had pumpkin and spice added to it at some point.

My head spinning, I moved on from pinterest and decided to check some of my favorite food blogs and websites for ideas. Eventually I stumbled across an entire opinion thread on serving these fancy pants pumpkin desserts for Thanksgiving.

Someone had written to say that he was invited by some foodie friends to a Thanksgiving potluck and he was in charge of the pumpkin pie. He wanted to impress his friends and take pumpkin pie to the next level, and was asking for some help with ideas and inspiration.  (sound familiar?)
The answers he got back were a total surprise to me, but the more I think about it, the more sense it makes.

So, I tossed all the recipes for pumpkin tarts and custards and trifles out the window, and started thinking about why I was so enamored with Grandma’s pumpkin pie in the first place. It was all about the buttery crust, the earthy sweet pumpkin, the warm spices, and the rich creamy custard. Why complicate things?

Of course I did want to do something just a little special with my pie this year, but was looking for a subtle twist on the classics rather than trying to reinvent the wheel. Just a touch of (totally optional) bourbon and some grated fresh ginger was all I needed to take things to the next level.

I also thought it would be fun to make some more work for myself by roasting my own sugar pumpkins instead of using canned. To save some time and a few dishes I tried mashing the pumpkin flesh rather than completely pureeing it in the food processor. You guys. Don’t do this. Just puree your pumpkin. (Or use canned)

When I started mixing in the rest of the ingredients, I realized that my pumpkin was kind of lumpy and had some strands of fiber in it.  Not wanting to end up with a funky lumpy pie filling, I decided to toss the entire bowl into the food processor to smooth it out. What I didn’t realize was that doing this would also whip the cream in my filling and make it sort of frothy. While the texture of the filling wasn’t changed, it did make the top of the pie look sort of funky and pitted. Not a big deal really, just a little funny looking.

A few days later I read online that in a blind taste test, most people preferred the taste and texture of pies made with canned pumpkin puree over homemade. Ugh. Whatever. 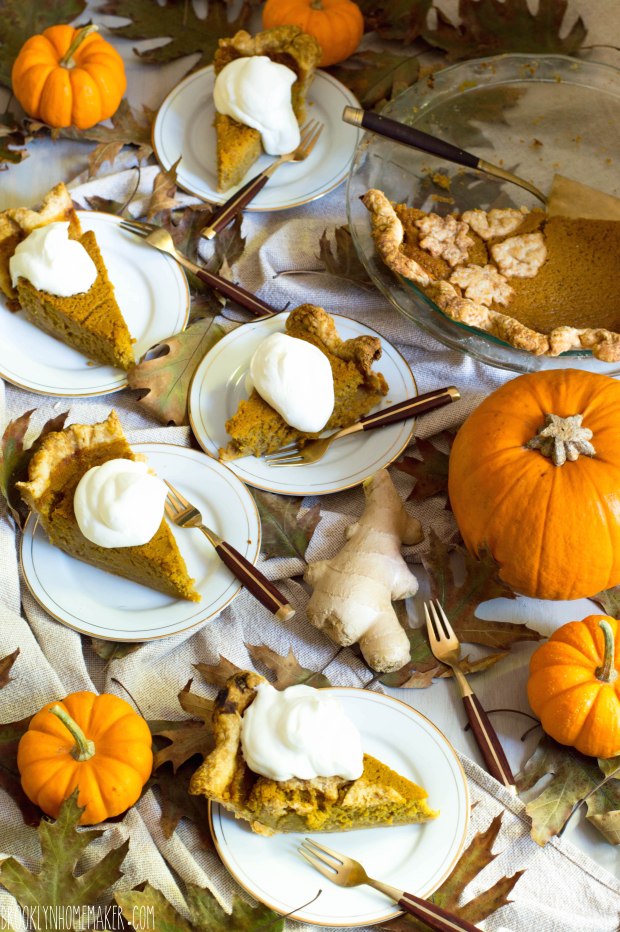 Whether you decide to roast your own pumpkins or reach for the can, this pumpkin pie is everything you could ever want in a Thanksgiving pie. Rich, thick, creamy, custardy, earthy, & warmly spiced. A little slice of heaven with a buttery flaky crust.

Because I don’t usually keep evaporated milk in the house, the filling is made completely from scratch, using only eggs and cream and milk instead of evaporated or condensed milk for the base of the custard. A splash of  bourbon adds a touch of warmth and depth without necessarily making it taste “boozey”, and using grated fresh ginger adds an edge of zingy heat that you wouldn’t otherwise get. When sliced and served a few of our friends noticed the hint of bourbon, others the touch of ginger, and others still didn’t notice anything until I told them. Neither of these flavors is overpowering, nor do they really change or alter the flavor profile of the classic pie everyone is craving on Thanksgiving day. If you’re looking for a classic pumpkin pie with a subtle something extra, this is the recipe for you.

Preheat oven to 425F.
Roll out pie crust and gently transfer to a 9.5″ or deep dish pie dish (** see note). Trim and crimp the edges and freeze the crust for at least 15 or 20 minutes. Fit the crust with a large square of parchment paper and fill the dish with pie weights, dried beans, or even pennies. Bake the crust at 425 for about 15 minutes or until the crust is set and the edges are beginning to brown. This is called blind baking the pie shell. For more info, the Kitchn has a great tutorial.

If you have any leftover dough from trimming and want to get fancy, you can use a cookie cutter or pastry stamp to create fall leaves for decoration. This is totally unnecessary but kind of fancy and fun. Cut the leaves out and bake on a parchment lined sheet pan in the same oven as the pie crust for about 10 minutes. You want them cooked through and nicely browned, but not burned. They won’t really brown any further once you add them to the pie filling.

Let the leaves and the pie shell cool and turn the oven down to 375F.

For the filling:
Whisk or stir the pumpkin, eggs, and brown sugar together until combined. Add all remaining ingredients and whisk vigorously until everything is well combined.

Pour filling into the pre-baked shell. Bake until the center is almost set, about 55-60 minutes or so. It’s okay if a small part of the very center is still wobbly, it’ll continue to cook and set as it cools. After about 25 or 30 minutes of baking, Add the pre-baked fall leaves if desired.

Cool completely before serving. Cover leftovers tightly and store in the refrigerator for up to 3 days.

Notes:
*You can use any recipe you like, or even a store bought crust, but I think all butter crusts have the best flavor. I used my favorite crust recipe, but it makes two single crusts so you can freeze one, make another pie, or use the other for your maple walnut pie.

**If you don’t have a 9.5″ or deep dish pan, you’ll likely have a bit too much filling. Do not overfill or it may run and drip. Any extra can be baked separately in ramekins if necessary. 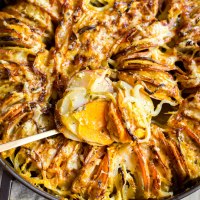 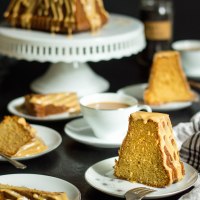